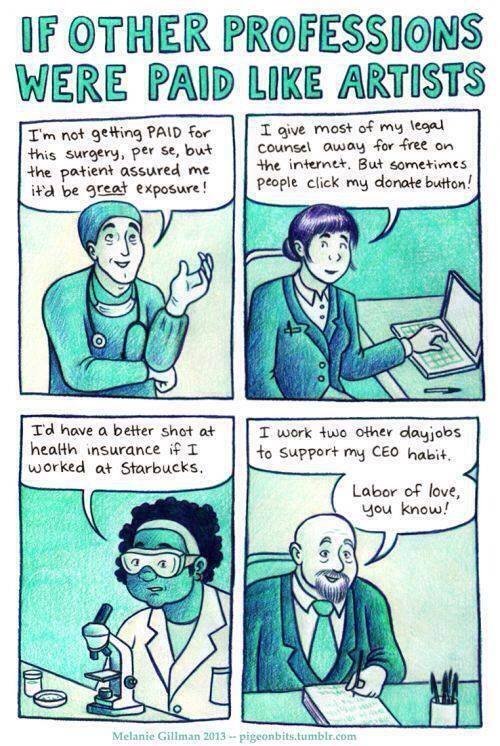 Freelancing is a constant hustle for the new gig to both pad the revenue stream and have something to fill in the blanks should an existing client decide to bail or inexplicably run out of work for you.

I spent the last couple of days not feeling so well, so trying to gin up new work was about the only thing I was good for. And in doing so, I was reminded that people really have no concept of the fact that “artists” (a category that working freelance writers unfortunately fall under) are actually trained professionals deserving of pay on par with their similarly trained and experienced – but non-artistic – peers.

Truly, the number of people out there expecting to get an entire newspaper’s worth of writing for less than you’d pay a kid to mow your lawn is staggering. This week, through a popular freelance bidding site, I was “invited” to bid on a project that asked just that – 20 600-word stories a day for the regal sum of 1 cent a word. Of course, the request came with promises of “thousands of dollars” to be earned and the usual requirements that the provided content be entirely original and pass through robotic plagiarism detectors without a hitch.

Um, right. “Thousands of dollars” if you don’t keel over dead first.

Had I been next to the guy when he made this request, I quite literally would have hit him very hard in a very soft and vulnerable place, after which I would have said, “Why are you complaining? That’s the physical equivalent of what you obviously want to do to me.”

I worked in newspapers for 15 years and, as a reporter, cranked out a lot of copy on a normal day. At small newspapers, it’s not unusual for a single reporter to produce two or three stories in excess of 300 words each day, and that’s not including taking the random obituary over the phone and writing up briefs or ultra short stories based on arrest records from the previous day. Some of those longer stories were written on deadline in less time than it takes you to get to the supermarket and back.

You ask non-journalists to do the same and they’ll act like you’ve just asked them to chop off a pinky with an X-Acto knife.

I guess people feel comfortable asking for this on bidding sites because I don’t think they really even know what they’re asking for, and after all, there are some poor bastards who will readily step up for this kind of insane assignment thinking it’ll be worth the time and aggravation.

Here’s a news flash: It won’t. It will both nearly kill you for a mere pittance and it undermines the role of paid, working writer for everyone else. For every person who takes a shit gig like the one I described, the rest of the world is convinced a bit more that writers are out there perfectly willing to work for below poverty wages.

I, for one, refuse to bite on these exploitative “opportunities,” and if you’re writing for a living, so should you. Because being taking advantage of isn’t making a living – that involves getting paid fairly for a reasonable amount of work that you are expected to complete in a logical amount of time.

Remember, if you feel like you’re doing something for nothing, you probably are.