A few weeks ago the Codorus Press crew – represented by me, founder Wayne Lockwood and editor/forthcoming author/master of promotions Tom Joyce – traveled up into the Appalachians for the Western Maryland Indie Lit Festival, put on by Frostburg State University’s Center for Creative Writing.

It was a bit of a hike for us, as we do our best to keep our book festival trips within relatively close range to our homes in New York, southeastern 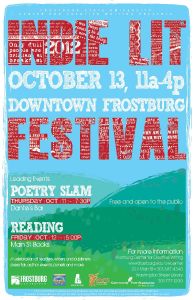 But the lure to Frostburg was twofold: First, there was the appeal of an entire event dedicated to the pioneering spirit of the indie publisher. Second were the invitations Wayne and I received to participate in two roundtables each.

In a couple of years of doing book festivals around the mid-Atlantic, this was the first time we’d been asked to share what we’ve learned about writing and publishing with other aspiring writers and indie publishers, and we knew we had to jump on this opportunity. Boy, am I glad we did.

Splitting our time between selling and speaking made for a busy day, but getting the chance to talk about what we do on so many levels was an incredibly rewarding experience. The roundtables were intimate – no more than 15 people in each, including the panelists – which made for a great, salon-like feeling to the proceedings.

The participants were genuinely interested in what we had to say and all had great and insightful questions. They were also polite and patient with our (cough*my*cough) occasional tangents, which, of course, eventually led to their own insights (or at least that’s what I kept telling myself).

One of the nicest surprises about the entire event was that I got to sit as a panelist on the sci-fi/horror and fantasy panel with fellow University of South Carolina grad and Gamecock student newspaper alum Andy Duncan. Like me, Andy’s early work history took him through the world of southern newspaper journalism, and he eventually began to dip his toe into writing short fiction.

Since then, he’s been published in some of SF’s most storied magazines and a lot of fine anthologies, as well as come out with a few himself. Beluthahatchie and Other Stories, his first collection, won the World Fantasy Award – no mean feat – and his second, The Pottawatomie Giant and Other Stories, came out earlier this year.

In a lot of ways (at least in my own mind), it was a bit like me, as a sometimes actor in community theater, being asked to talk about the craft alongside Robert DeNiro. Not to be too self-deprecating, I have a novel to my name and Andy has lots of truly fine stories. I knew when I saw that we’d be seated on the same roundtable I’d have the opportunity to learn some things from him.

What I learned was a lesson I really already knew – there’s little productive in being star-struck. If you meet someone in your field for whom you’ve got lots of respect, it’s rarely helpful to gush and fawn and always better to spend your time conversing with them not necessarily as equals, but at least as peers. True, I don’t have the awards and accolades Andy can boast, but we’re both writers in the same genre drawing from many of the same places in literature, geography and culture.

Truly, most of the other writers I’ve met who are far more successful and well known than I am have been modest, kind and generous folks who truly enjoy talking to other writers about writing. And I always remember that when I talk to other writers who are still working on their first books or stories and (heaven help them) look at me as an example of what they could be.