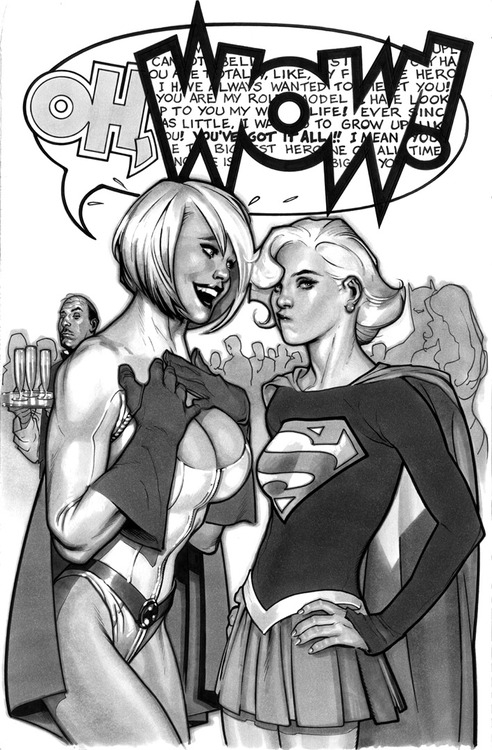 Not just because you, as attractive female cosplayers and convention attendees, have upped the legitimacy of these events by your very presence, but also because you’ve had to put up with a lot of crap. That crap stems mainly from two things.

First, for a long, long time, science fiction, comics and horror conventions were the purview of – how can I put this delicately? – inadequately socialized men. And these men were used to a nerd/geek hierarchy that has developed over many years in which he who knew the most won.

Notice the pronoun there – he. Were there women in fandom? Sure. But it was assumed for a very long time that women were lower in this hierarchy because there was no way the could ever know as much about this stuff as guys. They just weren’t as interested, right?

Meanwhile, images of females – particularly in comics – tended to be exaggerated and hypersexualized per the cleavage-abundant Power Girl model.

But here’s the second bit – a funny thing happened. Somewhere along the way, little girls started checking out the comics and the classic science fiction movies and the horror books. And they dug it.

Then, roundabout the last 15 years or so, as you little girls who felt free to bust out of your pink Barbie prisons became grown women, you arrived at conventions in droves. Some in civilian garb. Some dressed in costume. Some dressed as Power Girl. You were smart (as sci-fi and comic fans tend to be) and engaged. You knew the movies, the novels, the TV shows and the comic backstories. And (perhaps most importantly) you threatened the entrenched fan power structure (male) on its own turf while being – gasp! – attractive and smelling nice and sometimes scantily costumed.

What happened next seems like it has been an ongoing problem that’s been only recently addressed. Some of those poorly socialized men forgot that you costumed women were fellow fans and made some inappropriate comments, then got a little handsy, then made more comments.

Seems they forgot that those fellow fans – regardless of the fact that they were in sexy costume – where there to be entertained, not be the entertainment. Granted, as a guy I can certainly appreciate the aesthetics in play, but this was an example of the grownups forgetting their kindergarten lessons: keep your hands to yourselves and if you can’t say anything nice, don’t say anything.

It was so not cool that author John Scalzi, who attends a lot more of these events than I do, recently mounted a vigorous campaign to get all genre conventions to sign an agreement stating that they wouldn’t tolerate any sort of sexual harassment and would pursue legal action in cases of assault at conventions. Here’s the story of what inspired him to take action.

Personally, I love the idea of female fans, both as a fan myself and as an author. You bring a vibrant dynamic to events and make them something much more than what they once were. And who, really, can complain about more Power Girl?

But don’t lose yourself in the imagery, guys. The woman in that costume has a job, is capable of vigorous independent thought and is not there simply for your amusement, so don’t treat her as such.

Treat her with the respect, the admiration, the acknowledgement of physical boundaries and the sense of camaraderie that you would treat your male friends.